Recently, researchers were able to use graphene in the manufacture of a photodetector that enabled an optical chip. For some time now, graphene’s numerous promising characteristics have enticed researchers into exploring ways in which they can use it to make photodetector applications.

While graphene’s poor responsivity has limited scientific work, its wide spectral range, its speedy optoelectronic response due to its high electron mobility in, and a lack of band gaps have all contributed greatly to various application developments. 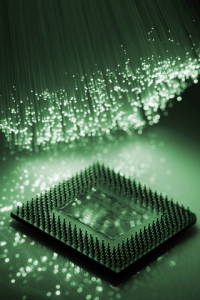 Despite the fact that reduced response to light might limit graphene’s use in applications that involve digital cameras, researchers have discovered a way in which it can be used as a photodetector which converts light into electricity applied in integrated optoelectronic chips found in gadgets.

To achieve this, the researchers used an inventive design directs light through a channel into the photodetector that is capped using graphene perpendicularly oriented to the channel. Gold electrodes are placed on both ends of the graphene, with electrode placed closer to graphene than the other. This design produces a mismatch in the energy electrons found in graphene and the metal contact. This mismatch creates an electric field close to the electrode.

In operation, the photons travel through the channel and begin to kick the electrons up to a greater energy level. The electric field then pulls these energized electrons into the electrodes, creating a current in the process- without a need to apply voltage.

This technique enables the manufacture of photodetectors that use light rather than electricity. With improvements such as thinner electrodes and narrower waveguides, it might be possible to produce higher amounts of energy.