You are here: Home › Investing in graphene › Graphene solar cells

Graphene is considered the next generation material for solar panel construction where it is expected to be a primary component in solar cells. By coating it with a silicon film, it retains its transparency and conductivity, thereby making it the best material for making solar cells thus far. The Helmholtz-Zentrum Berlin (HZB) Institute for Silicon Photovoltaics recently conducted a research which proved this fact. The findings have opened doors for the use of graphene in the thin-film photovoltaics industry. 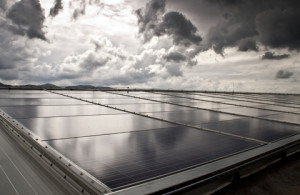 The Michigan Technological University researchers have made various developments in graphene solar cells. In the first case, they developed a structure so that the graphene sheets are held apart by lithium carbonate; this method has attained 7.8% efficiency. In the second case the researchers have worked out models of solar cells from single graphene and molybdenum diselenide cells; these are expected to produce 1,000 times more energy than that of equally weighing materials. In the third case, the MIT scientists have developed solar cells by combining graphene and zinc oxide, and the cost of producing these cells will be cheaper as compared to other options.

Another major development has been made by the Massachusetts Institute of Technology (MIT) in Cambridge, Mass. They have built solar cells using graphene and AuCl3, this is an organic photovoltaic with a high absorption effect, low weight and low cost. Since these organic photovoltaics are transparent, it implies they can be used on windows, thereby enabling you to tap your solar energy conveniently.

Other developments of graphene in making solar cells have been done by the University of Florida in the US. They have achieved the most efficient graphene based solar cell (at 8.6%) by making of dope technology.