You are here: Home › Investing in graphene › Graphene Integrated Circuit

The first graphene-only integrated circuit was created by International Business Machines (NYSE:IBM) three years ago. However, this was not a complete breakthrough because they used largely silicon and metal for much of the hardware. University of California Santa Barbara has made a crucial discovery that involves designing an integrated circuit completely from graphene only. This new model is based on the fact that graphene displays different qualities depending on its pattern, i.e. a wide ribbon displays metallic qualities while a narrow ribbon displays semiconductor properties. If chips would be designed this way then they would be much thinner, efficient and easier to assemble as compared to the ones made with mixed material. Currently a graphene Integrated Circuit is a theoretical computer model yet to be practically made; there are no plans to produce graphene chips at the moment, therefore this could take some time to see. 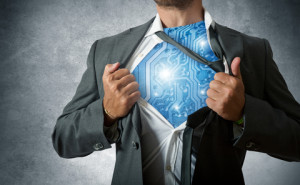 As scientists continue to improve silicon based ICs (which involves fashioning smaller transistors onto a chip, reducing power consumption and increasing its performance) they face challenges of contact resistance. This is resistance that builds up when components conducting electricity get in touch with each other. This may not be a problem for a single component, but when there are millions of transistors and interconnects on a chip, the combined energy is a major concern.

As a designer fuses various small components onto silicon chips, more complications emerge. This is where graphene overcomes silicon. While silicon is purely a semiconductor, graphene has both conductor and semi conductor qualities. Therefore, it can act as a metal conductor and as a semi conductor just like silicon. Due to these two major qualities of graphene, a designer can fashion the entire IC onto a graphene sheet and successfully do away with any contact resistance.